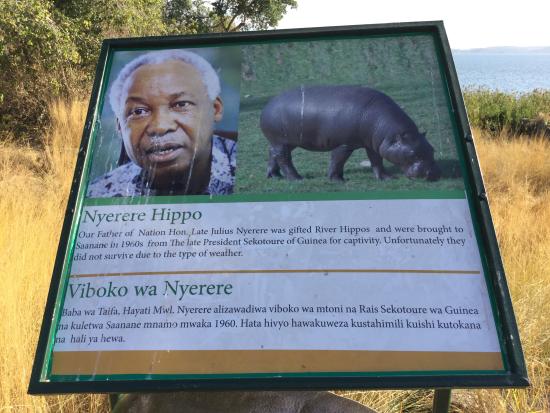 The new Saanane Island National Park has an area of 2.18 square kilometres and includes the total areas of the former Saanane Island Game Reserve, Chankende Islands and parts of Lake Victoria water surrounding Saanane and Chankende islands. Saanane Island National Park was named after Mzee Saanane Chawandi who was then the owner of the island. It was established as the first Zoo in Tanzania in 1964. Its main objectives were firstly to promote interest and conservation education in Wildlife, secondly was to promote recreation to the people of Mwanza town. Between 1964 and 1966 different species of Wild animals were ferried to the Island.

These included: Buffalo, Bushbuck, Dik Dik, Elephant, Impala, Black Rhino, Topi, Warthog, Wildebeest, Zebra, and Monkeys like Patas and Vervet, Giraffe, Porcupine and crocodiles. Dangerous animals like Rhinos and Buffaloes were caged while others were in free range. The island was given the status to be a Game Reserve in 1991 and the country’s 16th National Park in October 2012. The great Lake Victoria forms an amazing attraction sight. Wildlife species like Impalas, Crocodiles, Clawless otter, Rock Hyrax, Tortoise, Agama Lizards, commonly known as Agama Mwanzae, and Snakes particularly python are to be seen here. Others include Lion, spotted Hyena and Vervet Monkeys. About 40 species of residents and migratory birds are common on the Island.

Getting there: 15 min boat ride from Mwanza City

Boat excursion in Lake Victoria can be arranged on request. Rock hiking, Picnic sites, Game viewing and Bird Watching along the shores of Lake Victoria and the on the rocks.